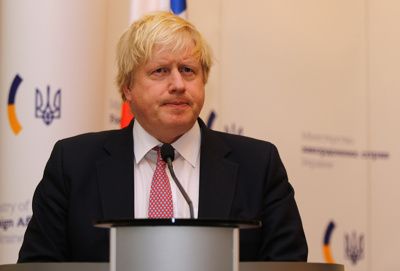 Sorry seems to be the hardest word for Boris Johnson, and according to the bookies he could be walking the yellow brick road to the job centre in 2022.

The master of blundering buffoonery has been slashed to odds-on prices to depart 10 Downing Street within the next 12 months – he’s as short as 2/5 with some firms. Any hopes that the Conservative Party’s former rocket man has of retaining his position appear to have burned out.

It comes after another revelation of a hedonistic ‘bring your own booze’ party, sorry, work meeting took place on parliamentary property in May 2020 – barely days after Boris himself had introduced a raft of lockdown measures in England. The PM, his wife and a catalogue of others are thought to have attended.

It’s not the first accusation of a shindig taking place among senior Tories while people up and down the land were suffering with lockdown blues – tragically, many were unable to spend time with loved ones in the last hours of their lives while Johnson guzzled Merlot and ate continental cheeses at his leisure.

Although he’s a master of catastrophe-averting PR, this is surely a bridge too far even for BoJo, and while a number of his colleagues have rallied to support him, it’s noticeable that just as many are calling for him to quit.

And in a major embarrassment for the Prime Minister, it’s being reported that he won’t even receive an invitation to the Scottish Conservative Conference in March – a bitter blow for a man who clearly loves a good old-fashioned knees-up.

A senior Scottish Tory tells me it is ‘inconceivable’ that Boris Johnson will speak at the party’s Scottish conference in March after the events of this week. This would be the first time the UK leader hasn’t. The Scottish party is very keen Johnson goes as quickly as poss.

If Boris does fall on his sword, he will be the third Tory PM since 2016 – alongside David Cameron and Theresa May – to resign from the role. It’s almost as if they’re not fit for purpose….

It will leave the Conservatives needing to find a new leader, and according to the bookies there will be no shortage of options to be the latest in a long line of Downing Street dwellers.

But who are the favourites to take over as Tory Party leader in the Next Prime Minister betting odds? 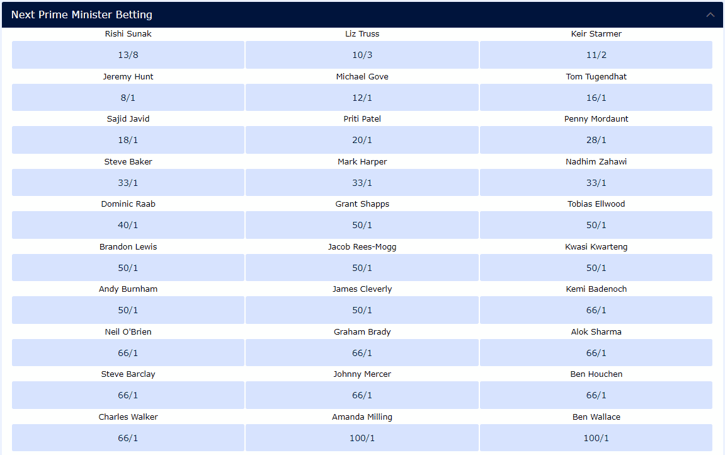 The ‘dishy Rishi’ memes were all the rage during the early part of the pandemic, and the chancellor earned rave reviews for his introduction of the furlough scheme, which may just have saved thousands of jobs.

He also represents a break from the Etonian background of Boris and many of his key supporters, and a clean start might be what the Tories need given that a general election would surely be accelerated by the appointment of a new party leader.

Sunak’s stamp duty holiday also propped up the UK housing market, bringing in some much-needed revenue to the coffers, but not all of his ideas have been classed as successes – his ‘Eat Out to Help Out’ campaign led to a rise in Covid cases of between 8-17%, according to research.

Something of a political veteran after serving as an MP for well over a decade, Liz Truss has quietly gone about her business in the background.

But she is considered something of a gentle revolutionary, calling for reform of education and childcare policy and even rejecting the Brexit referendum – not a popular move amongst her party.

Truss would return the Conservatives back to the middle ground of politics after Boris’ often right wing antics, and like Sunak she is something of an antithesis to the present incumbent’s bluster and hyperbole.

Having finished second behind Boris in the 2019 leadership battle, there is support within the Conservative Party for Jeremy Hunt.

He has held a number of key positions in politics, including culture, health and foreign secretary, and even now as a backbencher he is respected.

But Hunt is not well liked by many in the NHS following his spell as health secretary, which would impact upon his electability, and as an opponent of Brexit you have to wonder if he would have the momentum among his fellow Tories to win a leadership contest against Sunak and co.

While in the betting to be the next Conservative Party leader, there’s a certain unelectable quality to Michael Gove who, when he’s not attending raves in Aberdeen, has been ‘reshuffled’ more times than he’s had hot dinners.

Although he’s held a number of senior positions, Gove has never really been considered PM material – as evidence by the fact that he finished third in two separate leadership contests in 2016 and 2019. 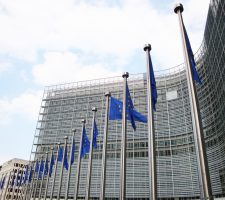